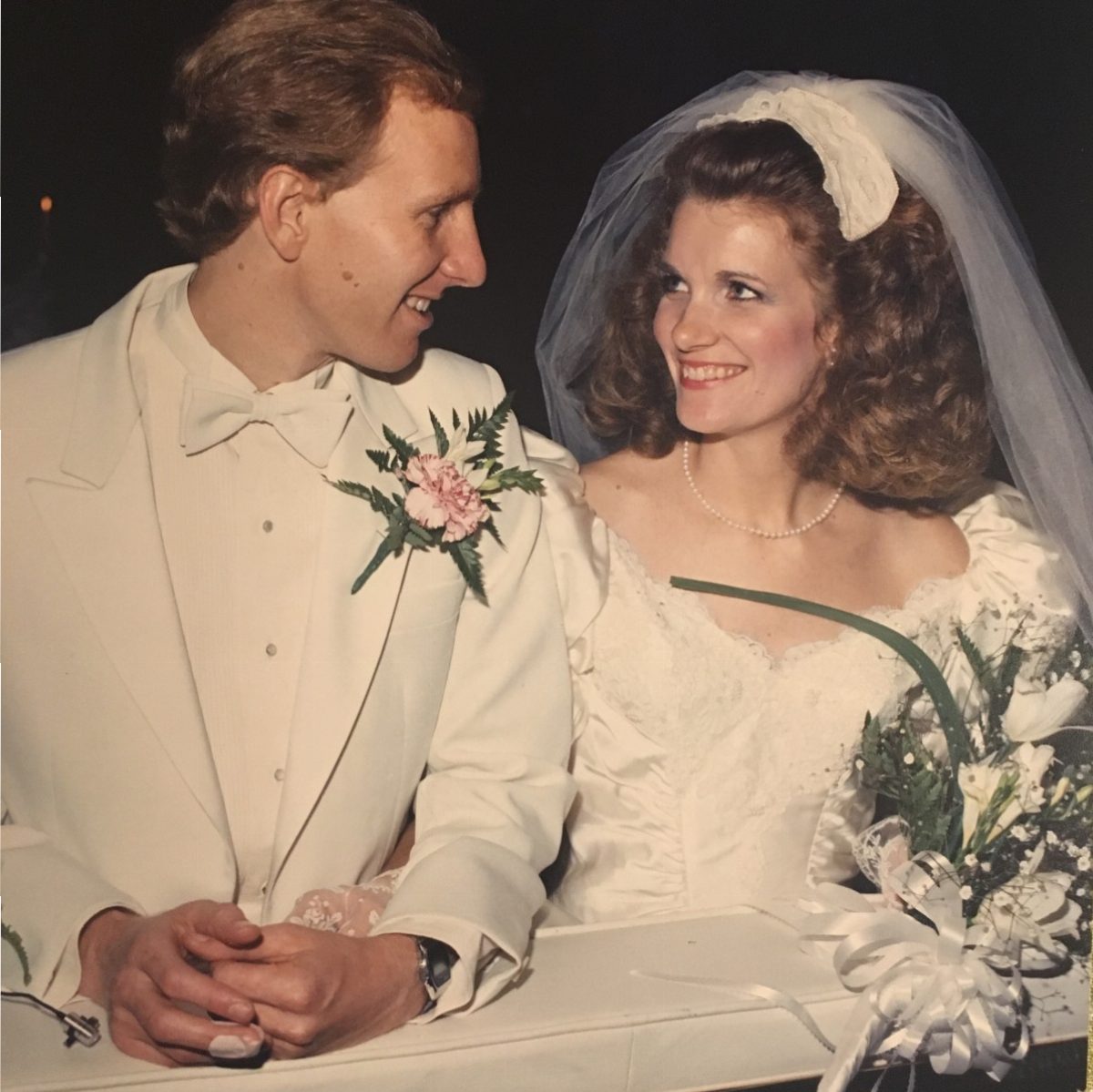 Many miracles, no doubt, were performed in 1985. This is my favorite. It’s a love story.

A single mama of two, who managed a daycare and kindergarten in Mississippi met a goal oriented engineer from North Carolina.

Friends of the two had teamed up, donned their angel suits and arranged a blind date. If she got a free meal and (hopefully) a movie it would be worthwhile. Work and church were the extent of her outings. She was barely able to keep food on the table and entertainment didn’t fit into her schedule.

Instead of a movie, they took a walk through a lovely city garden, where he touched and discussed each plant. Nervousness, maybe? His gangly body seemed prone to trip over his own feet.

When they drove around a large reservoir in Jackson, he was fascinated by technical equipment she knew nothing about. He was different, nerdy, but the conversation was intriguing. At dinner he explained different regions of North Carolina by sketching on a napkin. She couldn’t know then that it was the first of many such drawings. He asked too many questions like smart people often do.

Who would’ve guessed, years later he’d still ask too many questions and he’d need a subtle tap under the table when they were out with friends. He’d grin shyly and apologize. “Sorry, I’m an engineer.”

It would be an amazing feat for them to actually hit it off. It had been years since her divorce, but the experience still stung even as she continued to heal.

And then there were the kids: Her daughter Dawn was five years old and severely mentally disabled. She couldn’t speak, wasn’t potty trained, and needed constant care. Her son Ben was a fun, creative seven year old. When he met her kids, he seemed comfortable right away which made her smile inside.

Would a guy in his twenties want to take on such a huge responsibility? He had little dating experience, and knew nothing about women. He lived 800 miles away, didn’t make much money, and was five years younger. It didn’t seem likely.

After that first date, he called her from North Carolina. One phone call turned into another, and another, and another. Somehow love bloomed over a phone line. By the time he visited again in Mississippi, he’d forgotten what she looked like, and mistook one of her friends for her. After only a few months, the engineer asked the woman to marry him. With God’s help they’d build a good marriage, even with the challenges.

Wonderful friends in Mississippi hosted a memorable Friendsgiving with family and friends. Everyone took turns sharing memories and encouraging thoughts. When asked why he would choose the responsibility of an instant family, the groom said he’d decided to buy the whole field to get the treasure hidden there.

Years before they met, God alone was aware of their simultaneous prayers for a spouse. She wanted someone in a deep relationship with God, who’d be 100% faithful to her, would work hard, and would love her children as his own. Knowing it was a tall order, she decided to leave out temporal requests: tall, handsome, Beatles fan :), coffee drinker…. Well, maybe just one request, broad shoulders. She liked broad shoulders and he’d need them for the weight he’d carry. After her earlier betrayal, she cared about the important stuff. Marrying again was scary.

She couldn’t have imagined that she’d find someone who surpassed her desires. She’d be a marriage veteran before she fully recognized the gift God had given her. In years of harried activity, hardships and weariness, we often overlook the treasures in front of us.

She never would’ve known, on the morning of their wedding day, he’d knock on the door bearing gifts. In one hand would be a wrapped box containing a perfect strand of ivory pearls; in the other hand, medicine for pinworms, which her daughter had contracted. Life is a treasure but it was never meant to be perfect.

She couldn’t have envisioned how he’d love that special daughter. That in year 37, he’d pick her up from her group home and take her to get her favorite treat, a Coke. He’d send phone pictures of their smiling daughter with the treat in hand.

His tangible love for her son first showed up in the gardens they planted, the teams he coached, and the scout troop where he volunteered. The years would enhance and deepen that love.

She’d never thought of the raw roles required in marriage. That he’d drive to the pharmacy in the middle of the night for medicine when she was sick and dehydrated. He wouldn’t drink coffee as she wished, but he’d prepare it every morning, often leaving love notes alongside.

They couldn’t know the losses, heartbreak, and health incidents that were ahead. No one ever knows. The common busyness of everyday life would bring distance. At times there would be a chill between them when her only emotion was ambivalence. Barriers had risen. Those days require one step after another in the right direction. Faithfulness in marriage is a decision. At times you enjoy the bliss of being in love. At other moments you may wonder if the marriage was a mistake. Feelings need to be heard but they don’t determine your course. Covenant keeps you together.

After many dissipated years, a time comes when the irritants shrink to nothingness. A negative comment pops in your mind and the annoyance is too flimsy to voice. You glance towards your spouse with a sigh. It seems too good to be true that he loves you. He married you and he wants to be with you for the rest of his life. You cannot stomach the thought of living apart. You belong to each other. A rocky path brought you to this seasoned place. You’ve become one, not just because the Bible says so, but you know it in your bones. It’s the miraculous design that only the God of the universe could’ve thought up for a man and wife. God is faithful and all is well.

Happy Anniversary to my darling husband, Tom. You’ve exceeded all my dreams.