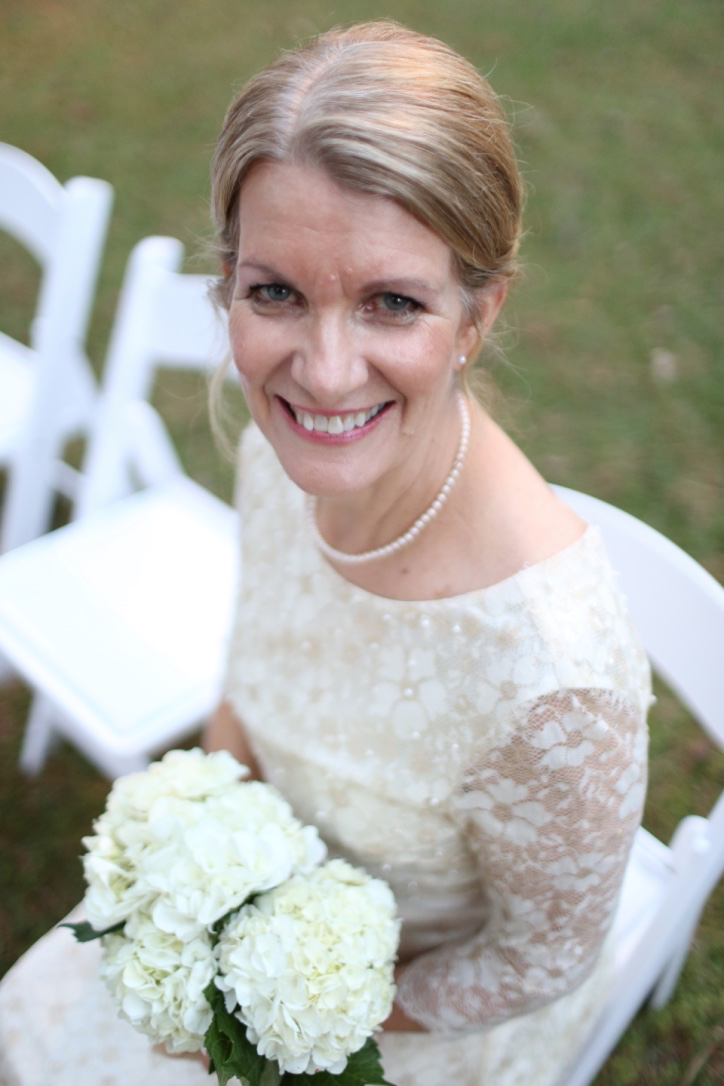 In November 1985, as our loved ones gathered around, Tom and I walked the aisle, prayed, linked arms and promised to stick together for life. It still seems too good to be true. We’d found each other—our prayers and spouse-searches were over, hallelujah. With my two children we became a family of four. Tom jokes he married me for my money and I married him for his body. I had $178.00 in the bank and he weighed 134 pounds after a big meal.

Our anniversaries had always been occasions for just the two of us. In 2015, however, we decided to celebrate in a big way. We hosted an anniversary supper and vow renewal in our backyard. Tom was in between jobs; our finances were precarious, and it didn’t seem like a smart time to host a party, but I couldn’t get the idea out of my mind. It must be from the Lord, I thought. If we waited until the perfect time we’d never do it. I sent invitations to friends and asked them to bring covered dishes. We were rich in love and support.

There is no more lovely, friendly and charming relationship, communion or company than a good marriage.

A friend wrote to me on Facebook to say how lucky we were to have a good marriage. Her comment inspired me to write this post. The word luck might be used by some people. Some might think we’re lucky to have a marriage that lasted. But luck really has nothing to do with it. God brought us together against all odds, and we’ve determined to stay together through even the hardest seasons.

Snapshots pop into my mind. Sleepless nights as we tried to get our daughter, Dawn, to sleep. Her cognitive deficiencies kept her from communicating with us and we tried to guess what she needed. She’d flail, stomp and cry through the night. I feel sad when I remember those years.

While Tom worked long hours, I stayed home to care for the children, as well as the typical chores of family life. I did everything. When we were finally together, we were exhausted; our emotional energy was spent. I couldn’t just pick up our conversation where we’d left off. We needed more time together than what we had. Sometimes it seemed like we were roommates.

Tom was in a serious accident when he worked at the paper mill. A co-worker from the company called me. “Your husband has been run over by a fork lift; I think he’s alive, but he’ll probably lose his legs.” I’m not kidding. The guy was nervous and shaken, and didn’t convey the message in a gentle way. With everything in me, I prayed Tom would live. I thought, even if he’s lost his legs, we can make it. I knew how irreplaceable my husband was to me and our children. I grabbed the phone for back-up. Tom’s sweet dad rushed over to take care of the kids. I raced to the hospital, while an ambulance, it’s siren blaring, carried my precious cargo. It arrived at the hospital just as I did. It felt surreal.

I’m happy to say, after much pain and rehabilitation he recovered and he still has his legs. We walked four miles today.

In thirty-five years, we’ve grieved the loss of three of our precious parents and one baby to miscarriage.

We’ve wrung our hands and paced the floor when Dawn had repeated seizures. We thanked God when medication brought them under control.

Twice our house flooded and was left in disarray for a year, due to broken pipes.

Job losses were hard to accept, and added to our financial and emotional burdens.

We were separated seven months when I traveled to assist family members in need.

There were excruciating family issues that broke our hearts for years.

Joys were woven in among the hard times. We had two children together and became a family of six. The kid’s unique home birthday celebrations, Christmas traditions, memorable trips, laughter and rejoicing in answered prayers. Through it all we’ve been deliberate in important ways.

Not long after our vow renewal, Tom began a job away from our home in Wilmington. I took care of logistics and joined him after our house was sold. The move was especially hard on me, but it’s given us opportunities to grow together. It’s hard to imagine not having met the folks we’ve gotten to know in Columbia.

Difficulties may pull spouses apart, but if unity is the focus, hard times can bring you together. We’re closer than we were thirty-five years ago. We have a palpable sense of oneness now. There’s no one I respect more than my husband.

We reveled in our vow renewal, not because we were lucky and life was perfect— we celebrated because we endured, chose and loved. The difficulties spurred us on, grew us up and highlighted the happy times. God’s grace gets us where we need to be.

A happy marriage is the union of two good forgivers.