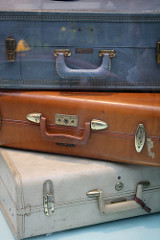 Why Making a Packing List is a Good Idea

Once upon a time back in the 1980’s, there was a bright handsome young man who held a degree in chemical engineering.  His career at a Paper Mill required  involvement in various professional organizations that supported his job and company. For quite a few years he held offices in one particular group, and eventually moved up to the office of Chairman over a regional chapter in the national organization.

In those days he was rarely home. His beautiful* wife stayed home with the four children while he spent too many hours at work. When he travelled, his wife was tasked with packing his suitcase. It was especially important to make the best clothing choices for the conference in which he would give a speech to a very large group of professionals.

As he was dressing and prepping for the meeting he noticed he had no shoes. His wife, who happened to have joined him at this particular meeting, had forgotten them! Panic ensued. Without the benefit of cell phones, an urgent search was made for size elevens. Alas! A son of one of the members relinquished his dress shoes and saved the day! This dear husband (of mine) squeezed his feet into a nice pair of dress shoes that were almost large enough. I vowed to never travel again without a packing list! True story.

Simply write down everything you might need for a trip. Take your time and list every possible item that could be needed for all seasons and occasions. Then while you’re packing, just skip over the things that aren’t pertinent for a particular excursion. Leave nothing to memory and you’ll forego that nagging feeling– “Oh no, I forgot the …….”. It has eased my mind so much to use this list. I’ve also created lists for specific trips or experiences such as hiking. I typed my lists on Word documents and made several copies— keeping one in my suitcase and another with cosmetics.

You may have a much better memory than I do. But if you’re like me, there is huge relief in depending on a list rather than on my brain. Actually, that’s the beauty of lists. Having a permanent list rather than re-writing each time we pack saves a lot of time. When you’re hurriedly packing it’s hard to remember everything. Anything we can put to paper or  the notes section of our phones will free our brains to focus on other important things.

Do you make such a list for packing? If so, I’d love to hear if it has been as helpful for you. What crucial  things have you forgotten to pack?